Do you ever browse through the history section of Pinterest? I do. All I have to say is, there have always been crazy things going on in this world, there just hasn’t always been as many of us in it. When you find something that has survived through a lot of that crazy history, it deserves a little respect, doesn’t it?

You would probably assume since I like antiques, that I would also be interested in history. It’s true. I am interested in history and I have an appreciation for it. It’s so fascinating to me what particular antiques have actually survived and made it through to modern times.

I currently have a gorgeous vanity dresser available. This drop-center dresser was made circa 1850. It’s an early Victorian, pre-Civil War piece. Can you imagine what this dresser has “lived” through??

This dresser has been around through 32 presidents. When it was made there were only 31 states in the United States of America. The phone and the television were not invented. It made it through the Civil War, both World Wars, and Vietnam. This dresser was around during the time of Emancipation, Prohibition, Segregation, Women’s Suffrage, and human kind entering outer space. And it survived. Amazing, isn’t it?!

Talk about “made to last!” Check out those dovetail joints and the wooden locks on the drawers. I wonder what would have been locked up in them? 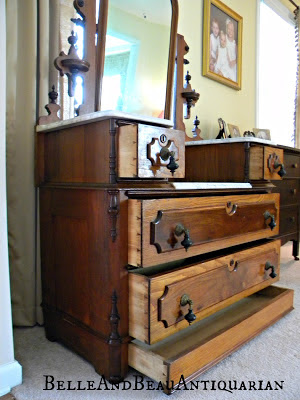 Ooooh! A secret drawer on the bottom!

A final reminder of just how long ago 1850 was: these shelves for a candleholder were necessary since electricity was not in homes yet.

***UPDATE*** Thank you for all of the interest in this piece. However, it has sold and is no longer available.
//assets.pinterest.com/js/pinit.js
Dresser’s Victorian Ornamentat (Google Affiliate Ad)